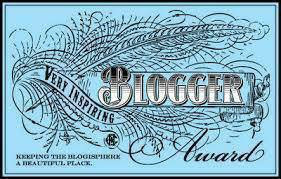 Last week, I was nominated by D.R. Sylvester for a Very Inspiring Blogger Award. I was shocked to be considered for anything like this, and if anything, I would nominate Writes & Responsibilities for the very same award! The blog is fun and a great read, so please pop by there and check it out!

In compiling my own list of nominees for this award, as there are many deserving candidates for this, I started thinking about whose blogs I look forward to reading. The ones I always wish I could get around to commenting if I wasn’t so busy with other things. There are a couple of blogs that I regularly read that are not on WordPress (gasp) like Anne R. Allen’s blog. I don’t know if this is a WordPress exclusive thing or not.
So, apparently this is the deal. The Rules or really more like guidelines go like this.

Okay, I’ve listed the rules (or more like guidelines ;)) so now I will list seven facts about myself:
1. I am a bit of a wine connoisseur. My favorite is a good Chardonnay. I also like Cabernet Sauvingon, and Sauvignon Blanc. Sorry, Merlot always seems to give me a headache.
2. I used to play the viola in middle and high school orchestra. I also tried to play clarinet, but by the time I managed to get over the break, I switched schools and could return to playing viola again in an orchestra.
3. I am an avid history student. Though I write Steampunk that takes place at the end of the 19th century, my favorite era is 18th century, American and European history. Second favorite is WWII era.
4. I grew up only a few miles from the (in)famous Seaside Heights, of “The Jersey Shore” fame. I’ve been on that boardwalk literally hundreds of times. And I cannot stand that tv show at all! And I have not been back there since Hurricane Sandy, so I don’t even know how much had been rebuilt. (Note to self, there’s fodder for a great blog post!)
5. For a while, I was a big anime fan, especially Inuyasha, Bleach, and Full Metal Alchemist Brotherhood.
6. I’ve got plans for several more series of books. The newest one, that sort of in development, is a “Zombie Apocalyptic New Adult Horror Parody” that I’m going to try and write in between The Inventor’s Son books.
7. I’ve attempted to read “Game of Thrones” no less than four separate occasions, the first one being when the book was first published, and the most recent was just this past month, where I named it as a book I’m currently reading on Goodreads, and have only gotten 9% through the book. However, I absolutely love the HBO series, and I do recommend watching it before reading or you will have absolutely no idea who anyone is.

Now, on to my nominees for Very Inspiring Blog Award:
1. The Sprint Shack I found them on Twitter last December, I think, and I was so excited to find a group of writers that enjoyed word sprinting as much as I did!
2. The Sarcastic Muse Another Twitter find, and I look forward to seeing their posts in my Reader.
3. Writes & Responsibilities See Above!
4. Kendall F. Person, thepublicblogger When I first started my blog back in March, he was one of my first followers. He’s got over 55,000 followers himself, some of whom I am sure have nominated him for blogs in the past. But I always find his posts interesting in the extreme and often very thoughtful.
5. Jodie Llewellyn She calls her blog “The ramblings of an aspiring YA author,” however, her posts are far from rambling. She often will ask questions that will elicit some nice long conversations in the user comments section.
6. Writers in the Storm They have some good tips for writers, and they post pretty often as well.

Well, I’ve worked on this post for over a week. I am taking a social media sabbatical starting August 3, 2014 and I will be back next Sunday. I have a great deal to work on with my second full length novel and I plan to release it by the end of August, so I need to get cracking. Have great week, everybody!

One thought on “Blog Award Nomination?!”

What do you think? Cancel reply